This week’s Spotlight is on Mia Marlowe, author of Scottish-themed historicals for Kensington, whom I had the pleasure of meeting at RWA 2012 in Anaheim, and again at RWA 2013 in Atlanta. Welcome to Blue Stockings & Crossed Genres, Mia!

Thanks for having me here today, Pamela. Since you’re blogging about Victorian fashions on my blog, I’ll be sharing about Scottish clothing here. Obviously, everyone’s thoughts run to kilts whenever Scotland is mentioned and it does have a storied past. But before we get to kilts, we need to have (pardon me, pun haters everywhere) . . . a good foundation!

For men and women, the universal undergarment was the leine (pronounced “LAY-nuh”) or shirt. Made of linen, it was a chemise-like, sleeved garment that came to the knees. Over this, woolen fabric was draped to form kilts or arisaids. 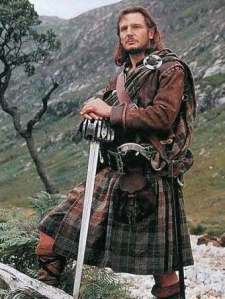 A belted plaid, or Great Kilt, is actually just a large rectangle of fabric 50 to 60 inches wide and 4 or 5 yards long. The wearer had to pleat it and strap a belt around himself to hold it up while draping the excess over his shoulder. This versatile garment also doubled as a blanket to wrap up in at night if a man was living rough in the Highlands.

An arisaid is the feminine version of a Great Kilt. The fabric is folded over a rope belt and then can be worn with both halves of the material forming the skirt or the top part can be used as a sort of built-in shawl. 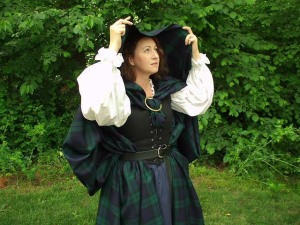 The practice of associating a certain tartan with a specific clan is a Regency era development. Wearing a kilt had been prohibited after the disastrous Jacobite uprising of 1745 and was forbidden under pain of seven years’ transportation for a second offense. The Highland Dress Act was repealed in 1782, but kilts didn’t really come into their own again until an English king came calling. (In Plaid Tidings, my hero Alexander is part of the advance guard charged with making sure Scotland will be safe for his sovereign!) When Sir Walter Raleigh arranged for King George IV to make his visit to Scotland in 1822, he assigned certain weaves to each of the clans. English nobles scrambled to come up with a Scottish connection so they could join the king in full Highland regalia. The result of the royal progression to Scotland was a renewed sense of nationalistic pride and a resurgence of Highland dress and traditions.

And now, I believe Pamela has some questions for me:

1. Since the heroine of my new historical, A Song at Twilight, is a professional singer, I was intrigued to discover that you are a classically trained soprano yourself. Would you share a little about your time as an opera singer?

Mia: My undergrad degree is in Music. After winning the District Metropolitan Opera competition, I made my debut with the Denver Symphony and sang with a number of regional opera companies. It was glorious and invigorating and I loved singing, but it required me to leave my small children and DH for increasingly longer periods of time. When I was offered the opportunity to spend 8 weeks in Germany with a repertory company, that was the tipping point. At that level, music is a demanding god.  No one can have it all. I will never regret not laying my family on the altar of my career.

2. Do you have a favorite opera and/or a favorite role (one you played or aspired to play or wish you’d played)?

Mia: I played a lot of different roles. I know what it’s like to cough my life away in a freezing Parisian garret (Mimi from La Boheme). I got a chance to create the role of Mariane in the regional premier of Kirk Meecham’s Tartuffe with the composer in the audience, which was both scary and gratifying. I’ve worn a corset and bumroll and sweated bullets over an aria that turns coloraturas’ bowels to water (“Come Scoglio” from Mozart’s Cosi Fan Tutte). I even did a pants role (a male part written to be played by a woman) when I was in college (Cherubino from The Marriage of Figaro). That was great fun. But I have to say the role I enjoyed most was Rosalinde from Die Fledermaus by Strauss. Not only is the music divine, she is the smartest person on the stage, outwitting her straying husband by seducing him at a masked ball and earning her own HEA!

3. How long have you been fascinated with Scotland, and have you ever visited it? If so, what is your favorite/keenest memory of the place?

Mia: When I signed a new contract with Kensington for more Scottish stories, my DH suggested it might help if we actually visited Scotland. We went last June. For 12 glorious days, we cruised around the UK. I really enjoyed the stop at Kirkwall on one of the Orkney islands. But my favorite spot was the ruins of Urquhart Castle on the shores of Loch Ness. No, we didn’t see Nessie, but it’s not hard to imagine something large and otherworldly beneath the surface of those dark waters. 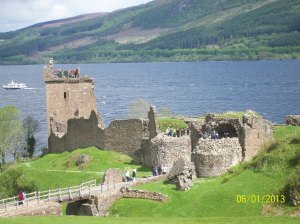 4. What are your hero and heroine’s strongest/weakest traits, and what makes them the perfect match?

Mia:  Alexander is a reluctant hero at first. He wants nothing to do with the Scottish side of his nature since his Scottish mother left him when he was very young. However, when he wins the Bonniebroch barony in a hand of cards, a betrothal comes with it—to a very determined Scottish miss. Lucinda helps him learn to forgive and find the strength to complete the three tasks which will lift a terrible curse from the old Scottish castle and all its residents.

5. Was it something specific or general that spurred you into writing, and which authors were the biggest influence on you as a writer?

Mia: I met a romance writer and realized writers weren’t the ivory tower sorts I’d always imagined them to be. She was just like me. So I reasoned if she could do it, I could too. The Greeks have a word for this. It’s called “hubris.” I had an ocean of things to learn before my first manuscript was published.

6. You’ve tried your hand at many things in life. What is one thing you haven’t tried yet that you would like to try?

Mia: I’d like to run away with my DH and be a full time world traveler—at least for a while. It’s been a dream of mine to circumnavigate the globe and hit all seven continents. Different countries and cultures fascinate me. Of course, I’d miss my family and my dogs (and my own bed) after a while!  At that point, I could always settle in for some armchair travel with some great books!

MIA MARLOWE is a rising star whose Touch of a Rogue was named one of Publishers Weekly’s Top Ten Best Romances for Spring 2012. Mia learned about story-telling while singing professional opera. She knows what it’s like to sing a high “C” in a corset, so she empathizes with the trials of her historical heroines. Mia resides in Boston, Massachusetts. For more, visit www.miamarlowe.com & connect with Mia on Twitter and Facebook. 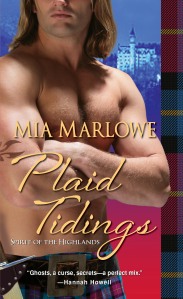 Christmas in the Highlands…

Not any dashing English lord’s idea of a good time. But now that Lord Alexander Mallory has won a Scottish estate in a hand of cards, he is the unlikely laird of wild, snowy Bonniebroch. Worse yet, the ancient pile of stones comes with a betrothal. To a fiery red-headed virgin. And a curse.  Alex will have his hands full honoring the first, seducing the second and breaking the third … all by Twelfth Night.

Want a Highlander for Christmas? Order yours now!

Mia will give away a print edition of Plaid Tidings to a lucky commenter. To enter, leave a comment or question for her. Or answer a question of your own: Famous or not, living or dead, who do you most want to see in a kilt?

ETA: Michelle Fidler wins the giveaway of Plaid Tidings! Please contact Mia with your mailing address, so she can get your prize off to you. And thanks for stopping by!

And catslady wins the giveaway of A Song at Twilight over on Mia’s blog. Please contact me with your mailing address, so I can send you the book. Thanks for participating!