Real-life distractions have me posting this a bit late, but I have been thinking about the episode on and off for the past week. Here are my thoughts in the usual order. 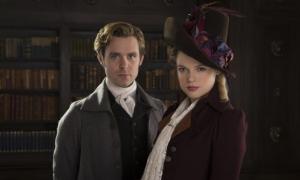 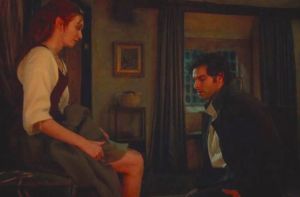 The streak is over, because Ep. 6 served up a whopping portion of WTF? as Ross sold his shares in Wheal Leisure for 600 pounds and gave every penny of the money to Elizabeth before he himself was free of debt! In the book, he does so after Caroline has bailed him out. Granted, changing the chronology of events is something that many adaptations do, but this one dealt a major hit to Ross’s character, which has already taken several this season. That he already pays more attention to Elizabeth and Geoffrey Charles than to Demelza and Jeremy  is bad enough. That he actively excuses leaving his wife and son virtually penniless in the event of his imprisonment with “Demelza’s a miner’s daughter–she has resources. Elizabeth is a gentlewoman” merits not just a boot to the head but the whole damn shoe factory! At least he got something of an earful from Prudie about  his neglect and inattention. But a last-minute gift of silk stockings didn’t quite make up for all that, and I imagine  he’ll get another earful from Demelza should she learn about those 600 pounds. She might not mind so much for herself, but she’d mind a whole lot for Jeremy…