Oh, boy. This episode is one is bound to have viewers up in arms as Ross initiates a controversial chain of events that make him hands-down the Worst Husband of 1793 (and put him in the running for the Worst Husband Ever). And this time around the WTF? comes straight out of the books. 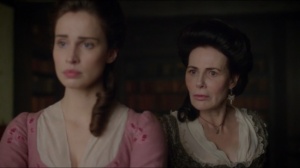 On to the Elephant in the Room. Ross and Elizabeth’s encounter is a major plot point and the subject of endless speculation: was it rape or consensual sex? You can find people on both sides of the argument. Graham’s son argues that his father meant it to be a frustrated outpouring of “love and longing.” Other readers, however, cite Elizabeth’s attempts at resistance and demands that Ross “stop” as evidence of rape.

In the novel Warleggan, the scene “fades to black” as Ross carries Elizabeth to the bed, leaving the rest to the imagination. After the fact, Ross remembers it as an act to which Elizabeth ultimately consents, while Elizabeth considers it “a violent taking of what was not his.” My own opinion can vary on any given day, although I tend towards the view that Graham was trying to write what’s become known as “dub-con” (heavy on the “dub”) and didn’t quite pull it off–at least not where more modern readers are concerned (Warleggan was published more than 50 years ago). Because, for me, even if Elizabeth did finally submit (offstage), Ross’s ignoring her initial resistance and physically overpowering her showed tremendous disrespect for her as a person and virtually no concern for her as a friend/relation. It’s all about him, his sense of injury, his outraged sense of possession. It’s Ross at his nadir: his arrogant, controlling, selfish, obsessive worst. Which is why I’ve never thought of Ross as a straightforward romance hero. He’s capable of brave, generous, noble deeds. But he’s also capable of dark, destructive ones. This is the worst thing he does in the whole series, and frankly, he deserves to be strung up by his heels and beaten like a carpet for it. Even Graham doesn’t wholly let him off the hook for it, because his action that night ends up having consequences that last into the next generation.

Both TV adaptations muddy the waters even further. In Oldark, Ross seems almost in a fugue state after a mine explosion kills Henshawe (who doesn’t die in the book) and obsessed with “stopping disasters” before they happen. In his derangement, he rides to Trenwith, climbs in at the window (from the book), and tells Elizabeth he’s come to stop her from marrying George. She asks him to leave several times, but he doesn’t listen, and finally pushes her down on the bed as she exclaims, “My God, Ross!” Later, they are lying in bed, not touching or looking at each other, staring straight ahead with identical shell-shocked expressions as though neither can believe what happened. There is no morning-after conversation and much of the novel’s ambiguity is preserved .

Newdark apparently wanted to avoid the question of rape and portray the encounter as consensual sex by showing Elizabeth as an ultimately willing participant. That being said, the British broadcast version still conveyed the unpleasant subtext that Elizabeth’s resistance was only a show and she really wanted to have rough sex with Ross who behaves nearly as badly as he does in the book, practically kicking the front door down and waking Aunt Agatha with his forced entry into the house. In the US, PBS squeamishly omitted several of the more provocative lines between Ross and Elizabeth, showing only their kisses and subsequent fall onto the bed. Both versions show the morning-after scene in which a not-at-all-traumatized Elizabeth tries to get an answer from Ross about what he means to do next, while Ross can’t button his trousers and get out of there fast enough. To which I can only return an unequivocal, “Pig.”

Newdark departs still further from book-canon by having Ross immediately start making excuses and rationalizations to Demelza the moment he comes home. In the novel, he at least has the sense to keep his mouth shut about what happened, though Demelza–no fool–figures it out at once. The biggest departure from the book, of course, was Demelza’s wallop that knocks her cheating husband on his arse. Anachronistic though it was, I’m not even going to pretend that I didn’t find it satisfying. Especially since I know things will get worse before they get better for these two.