The last couple of weeks have been chock-full of stuff. So much stuff that I never got around to blogging last weekend. So, while I still have some “little grey cells” to devote to the task, here’s a five-point bulletin on what’s been happening lately.

1. There is no book that’s so wonderful that someone out there won’t hate it. And there’s no book that’s so awful that someone out there won’t love it.  That being said, I have been surprised, pleased, and touched by the response A Song at Twilight has received so far. Heartfelt thanks to all of you who enjoyed the book and took the time to post reviews on Amazon, B&N, Goodreads, and elsewhere. A new book by a comparatively new author needs all the support it can get!

One especially pleasant surprise was this starred review from Library Journal (I knew it was positive, but I didn’t know about the star until I received a tweet about it, and yes, I’m going to indulge myself a little by quoting it):

★ 10/15/2013
“Devastated when Robin Pendarvis’s past wrenches him from her life and crushes her romantic dreams, silver-voiced Sophie Tresilian gives up on love and immerses herself in her music. Now, four years later with her star on the rise, Sophie almost has it all—until Robin walks into one of her London performances and turns her world upside down. The past alternates with the present as tantalizing flashbacks bring fans up to speed in a compelling, deeply complex romance that becomes more tangled as it progresses. A self-possessed heroine and a hero determined to make things right prevail against formidable odds in this engaging story that is enhanced by an abundance of family and friends (some introduced in Waltz with a Stranger) and leaves room for the stories that are sure to come. VERDICT Moving, lyrically written, and superbly inventive, this late Victorian tale has a dash of mystery and more than one startling plot twist to put a refreshing spin on the typical tender reunion story. A delightful way to spend an afternoon.”

It’s always such a lift when a reviewer “gets” your work–and the fact that she avoided giving away major plot spoilers while reviewing is another bonus! 🙂

Of course, the funniest response I’ve received has come from the 10-year-old son of my Queen Beta Reader, who wanted to know “why Auntie Pam’s books all have a guy showing his chest on the cover?” Out of the mouths of babes . . .

2. Much to my surprise, an article I wrote almost a year ago–around the time Waltz with a Stranger came out–ended up being tweeted and re-tweeted all over the Twittersphere last week. I’m startled but flattered by this occurrence, and if the advice I offered helps other writers, then that’s surely all to the good. But I guess it goes to show that nothing posted on the internet ever really dies!

3. With Halloween fast approaching and Thanksgiving following close on its heels, I’m bracing myself for the onslaught of holiday music–good, bad, and indifferent. But I’ve found one palliative already in Connie Dover’s Christmas CD “The Holly and the Ivy.” I discovered Dover when I was in graduate school. She doesn’t tour much or have many recordings to her name, but her voice is exquisite: light, clear, and supple rather than ethereal. Not that I mind ethereal voices, but it’s refreshing to hear a non-breathy trad singer. Dover does a lovely job with most of the holiday standards on the CD, but I can already tell that “The Huron Carol” is going to be a favorite. It’s an unusual song written by a French Jesuit priest in Canada for the Huron Indians, retelling the Nativity story in their cultural terms. Dover sings in French and English here, flawlessly. So, if you’re looking for a Christmas album that’s traditional but also pushes the envelope a little, I recommend this one!

4. Various houses in my neighborhood have been going all out for Halloween. So I’ve been regularly taking pictures on my walks of what I see. Offerings range from the grisly (hanging skeletons, a front lawn strewn with fake body parts–which I’m not including here!). . .

. . . to the elaborate (an ever-expanding haunted mansion, a pirate-themed house) . . . 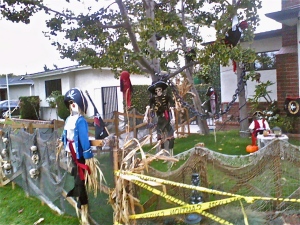 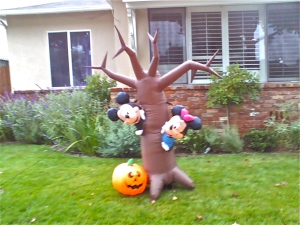 Most of the decorations are quite clever, although I personally think the graveyard motif is a bit overused this year, along with giant spiders in their cotton batting webs.

5. The Spotlight column returns on Monday, 10/28, with special guest Mia Marlowe, author of Scottish-themed historical romances. Mia and I will actually be doing a blog swap that day, guesting on each other’s sites to promote our new releases. And we’ll each be giving away a copy of Plaid Tidings and A Song at Twilight, respectively. So look for us on Monday. Mia will be here, at Blue Stockings & Crossed Genres, while I’ll be over at her place. Hope to see you there!

In addition to the blog swap giveaway with Mia, I’m holding my usual giveaway this weekend: a copy of A Song at Twilight to one commenter. Post about anything you like, whether book-, Halloween-,  or life-related, until midnight PST, 11/3!

ETA: Michelle Fidler wins this week’s giveaway of A Song at Twilight! Please contact me with your mailing address so I can send you your book!

6 thoughts on “End of October Thoughts: A Potpourri Post (+ Giveaway)”