Emerging from several days of preparation, cooking, and consuming to write this commentary. My observations this time are likely to be on the short side partly because of the holiday, partly because this was a “fall-out” episode, in which characters mostly reacted to what had happened last week. Namely, Ross succumbing to lust, jealousy, and outraged possession and having a one-night stand (level of consent debatable) with Elizabeth. And getting decked by Demelza when he returns and immediately starts in with the lame excuses. 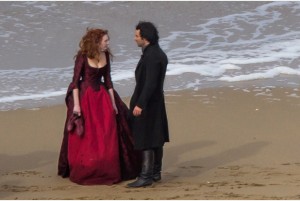 In a word, Ross. Seriously, he needed to stop talking. To stop making excuses. To stop trying to justify what he did. To stop trying to control/rewrite the narrative. Because the hole he’d already dug for himself got a foot deeper every time he opened his mouth. This is not Graham’s Ross–or even Oldark‘s Ross–neither  of whom covers himself with glory after the Elizabeth Incident, but neither consistently shoves his foot in his mouth either. Both versions have enough sense to shut up in the immediate aftermath of what they’ve done.

Newdark‘s Ross? Not so much. It was getting to the point where I cringed every time he tried to talk to Demelza because I knew he’d come out with something that would just offend or alienate her even more. It would be hard to choose from all the bone-headed, self-serving crap things he said, but I think the one that took the cake was his suggestion that she “bide a while and let it all play out.” In other words, wait around until he decides which woman he wants more. Um, yeah, buddy–that’ll go over well with your wife of six years.

Most glaring of all, so far? He hasn’t apologized. Or asked forgiveness. There’s been a ton of self-justification but no remorse. Word of advice: Stop mansplaining and start crawling. Now. And stop trying to throw money at your problem in hopes that that will make it go away–that’s a George move.

Apropos of which, Ross’s treatment of Elizabeth isn’t any better. Even though I’m largely indifferent to her, I can sympathize because she had made a decision to move on with her life, to marry George for comfort and security. And why shouldn’t she? It was her choice to make.  And now Ross, by his arrogant actions, has completely upset her plans and thrown her into turmoil. Worse, he doesn’t have the guts to ride over and thrash things out for once and for all. So, his getting an eyeful of the Warleggans’ wedded bliss as they move into Trenwith? No more than he deserves.

Next up, the finale! Until then…