I have a thing for historic hotels–the Empress in Victoria, B.C.; the Coronado del Mar in San Diego; the Savoy in London. But, as I have neither the occasion nor the wherewithal to stay in any of them, my interest has remained purely academic. (Although I have at least visited the first two, and taken copious photographs!)

That changed last week during a brief visit to Northern California to celebrate the birthday of an old family friend–details to come in a later blog post. My traveling companion wanted to be as close to the restaurant as possible, so after some searching, I secured us a room at the historic  “art-deco” Cardinal Hotel in downtown Palo Alto, less than three blocks away. My initial goal had simply been to find clean, affordable accommodations for a couple of nights–and while that goal was satisfactorily met, the charming detour into the past was an unexpected bonus.

Walking into the lobby of the Cardinal was like walking into a more elegant, leisurely era, or so it seems to the harried, 21st century traveler. Tiled floors, wrought iron chandeliers shaped like acorns, a Batchelder fireplace flanked by a pair of tall wrought-iron torchieres that haven’t been moved from their original placement since the hotel was first built in 1924.

Other furniture included well-padded leather sofas and upholstered armchairs, gilt-edged mirrors that made the room appear even larger; an antique piano by the fireplace; a disabled telephone switchboard in one corner and two wooden phone booths at the far end of the lobby; and even a pair of octagonal game tables complete with old chess and checkers sets to occupy guests in the evenings or while they waited for the dining room to open. 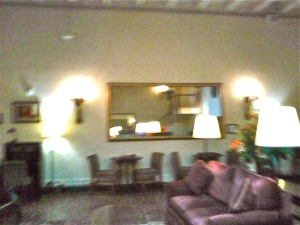 The Cardinal also once boasted a restaurant called Wilson’s, and according to a posted menu from the 1920s, the price of a lavish meal there could be reckoned in cents, not dollars! Alas, that was one custom that did not survive the passage of time! Still, complimentary coffee, tea, and hot chocolate were available at all times in the lobby, which was a nice courtesy, especially in the morning.

Upstairs–reached via an old-fashioned elevator with an outer door you had to open manually before entering–the decor was much more modern. No air conditioning, but a large ceiling fan revolved almost soundlessly and kept things nicely cool. The plumbing was (mercifully) up to date, and there was a large color TV and wireless internet access. Some bedrooms shared a hallway bathroom and shower–a practice in some European hotels, while others had private baths. (We opted for the latter–in this case, convenience trumped style!)

Not everything about the Cardinal was perfect. There’s no on-site parking, for example, and you have to stow your vehicle on the streets, the public lots, or the parking structure across the way.  The good news is that on weekends–after 5 PM Friday until 8 AM on Monday–you can park pretty much wherever you want for as long as you want. This was just about about ideal for us, as we checked in Friday afternoon and stayed until Sunday morning. But the staff was unfailingly helpful and courteous, the amenities provided were of good quality, and the period ambiance irresistible. For a few days, the Cardinal Hotel provided us with the perfect escape.