Last week was an experience for me. But not just because Waltz with a Stranger was finally released. On December 5, I was one of a small party that attended a reception in honor of the King of Thailand’s birthday, held at a local country club. (A relative teaches the general consul’s son, and unexpectedly received an invitation. The rest of us came along as moral support.)

So there we were, all dressed up for the evening–can’t go wrong with a little black dress and a sparkly necklace!–and getting an on-the-fly lesson in Thailand’s political history, an eyeful of Thai traditions, and later on, generous servings of Thai food (tasty, but definitely on the “hot” side. I regretted the apparent absence of Thai iced tea to cool things down, afterwards.) There was a great deal to see, hear, and absorb–much of which I’m still reflecting on–but here are some thoughts/discoveries to start with. 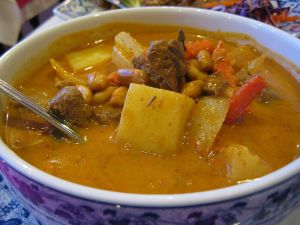 Bhumibol Adulyadej, also known as Rama IX, has ruled Thailand for 65 years, and is still a popular, much revered figure in his country. As a citizen of a nation in which we “fire” our head of government every four years if we’re dissatisfied with his policies and see a changing of the guard every eight years whatever the outcome, I found myself amazed by the thought of any one person being in power for six and a half decades. And then remembered Queen Victoria and her own 64 years on the English throne, and the reverence she most often inspired in her subjects, even those who were critical of her. The British and the Thais were both fortunate to have monarchs who appeared to have their country’s best interests at heart.

It was intriguing to hear how invested the Thais were in the outcome of our own recent election. One of the speakers of the evening proposed a toast to President Obama, in honor of his second term, and mentioned that the president had made a recent visit to Thailand after winning reelection. He voiced the hope that Thailand and the U.S. would continue their friendly relationship of many years. 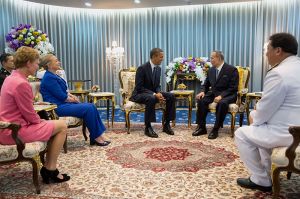 Back in the club, monitors showed news footage of Bhumibol’s past visits to the United States. A placard displayed an excerpt of a speech he gave on one such visit.

On lighter subjects: Thai national dress is stunningly beautiful. We saw a number of Thai women, many exquisitely gowned in silks and satins, lovely sheeny fabrics heavy with embroidery or crusted with gems. 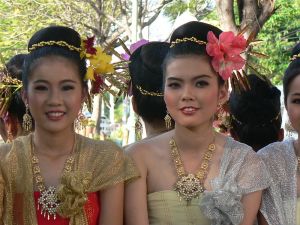 Thai culture seems to place a high value on beauty in general. On the terrace where the reception was held, there were corners in which guests could see popular Thai pastimes at work: garland-making–jasmine is a staple, because of its perfume; fruit and vegetable carving, into beautiful, elaborate shapes; and calligraphy (I now have a bookmark with my name written in Thai). 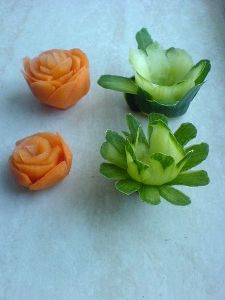 Throughout the evening, we glimpsed some traditional Thai dances–“glimpsed” because the terrace was very crowded and visibility at something of a premium. I marveled at the sight of the dancers in their elaborate headdresses, which I hoped were lighter than they appeared. And a small group of musicians played throughout the evening. I noticed a cello, a hammer dulcimer, something that looked like a large xylophone, and a thoroughly modern electronic keyboard! Or perhaps it was a synthesizer–I never plucked up the nerve to ask.

But, in the midst of all this fascinating history and culture, perhaps the most novel experience of the evening for me . . . was finding myself, at a mere 5′ 4″, among the taller people at the party. An evening to remember indeed!