With ten episodes allotted for this series, I can only applaud Newdark‘s decision to devote six installments to Warleggan, the fourth book of the Poldark Saga and an undisputed game changer.  Oldark managed to fit it into four episodes fairly efficiently, but had to cut some corners and downplay some emotional beats. Six episodes gives the story more room to breathe.

While Newdark tends to focus strongly, sometimes even claustrophically, on Ross, this week was mostly about another Poldark: the ill-fated Francis, whose death by drowning was foreshadowed as early as Book One. His fate is rendered more tragic by the redemptive arc his character begins in Jeremy Poldark, to the point where many who disliked him last season and in the early books are now genuinely saddened by his loss. 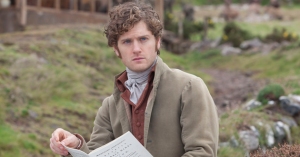 This week, the good outweighed the bad, for the most part, though there were a few things that I thought could have been stronger.

For the second episode in a row, nothing tripped my WTF? switch. I wonder how long this streak will continue!