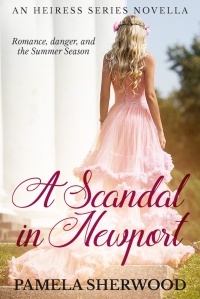 More than halfway through August already–where did the summer go? I’m still catching my breath after a conference and a short vacation. And seriously, fall doesn’t officially begin until the autumn equinox on September 22! That’s my story, and I’m sticking to it!

Fortunately, whatever season this is, summer reads are still thick on the ground. Apropos of which, I’m happy to announce the arrival of A Scandal in Newport, my new novella in The Heiress Series!

The Story Behind the Story: Several readers expressed interest in Thomas Sheridan and Amy Newbold, the secondary couple from Waltz with a Stranger, along with regret that they didn’t get their own story. And after some consideration and an unexpected brainstorm, I decided to write that story.

Not long after hatching the idea, however, my creative life took something of a detour, leading to the creation of my new series, The Lyons Pride. I was still determined to finish A Scandal in Newport, however–especially after including a preview of it in my short-story collection, Awakened and Other Enchanted Tales.

Recapturing the lighter tone and more Trans-Atlantic setting of my first series was a bit of a challenge, but it was one I came to enjoy, especially after delving more deeply into research. Gilded-Age Newport was a fascinating place to study, with its mix of breathtaking scenery, splendid mansions, and colorful personalities. This was where the American elite came during the summer for what probably seemed like an endless round of parties and promenades–all with the object of finding eligible husbands for their unmarried daughters, many of whom were considerable heiresses.

In 1895, Alva Vanderbilt landed one of the biggest fish of all: the ninth Duke of Marlborough, for her daughter Consuelo. If, that is, she could convince/browbeat/blackmail the recalcitrant Consuelo into accepting him. Which happened, though not until after a long, dramatic contest of wills between mother and daughter. (The whole of this battle is related in Consuelo’s memoir, The Glitter and the Gold.)

As a happily engaged couple, Thomas and Amy are exempt from the matchmaking stratagems of Newport’s pushy mamas. But trouble manages to find them all the same, and they soon find themselves fighting for their future together.

I hope you enjoy this tale of romance, intrigue, and danger set in America’s very own “kingdom by the sea”!

Happy reading, and enjoy what remains of summer!