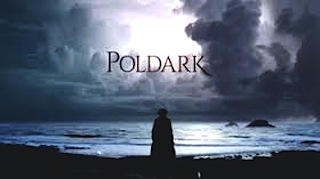 Getting my thoughts down on the new episode while they’re still fresh.

The story as a whole is gaining some decent momentum, with Ross taking a more active interest in reviving the family mine–a welcome change from last week’s incessant moping over Elizabeth. While there’s still a fair amount of that, Ross throwing himself wholeheartedly into a new project is as welcome as a breath of Cornish sea air.

Aidan Turner continues to grow into the part. He’s a younger, more soft-spoken Ross, more inclined to wear his heart on his sleeve, and lacking some of Robin Ellis’s crispness and authority. Nonetheless, he has a good rapport with the miners, and he’s a bit gentler with Demelza than he is in either the books or Poldark 1975. No harm there, as this slightly more cowed, feral, fragile Demelza responds well to gentleness.

I could wish this Ross was less of a susceptible sap where Elizabeth is concerned. Some of this is unavoidable: Elizabeth is always a bit of an Achilles heel for Ross, but nowhere in the books is there a scene where they trade longing or flirtatious looks while dancing, or where he believes that Elizabeth is all set to leave Francis for him and is mortified to discover he’s misread the whole situation (the 1970s series is a different kettle of fish, and I’m no more fond of that plot twist than Graham himself was). I did appreciate Turner’s Ross having a mini-epiphany about his futile Elizabeth fantasies and asking Demelza if he had the words “Half Wit” branded on his forehead. Being less deferential than she, I was tempted to respond, “No, only STAMPED!”

Rolled my eyes a little over the skinny-dipping scene, which has become almost a screen cliche since the 1995 miniseries of Pride & Prejudice. But only a little–because Ross does go swimming in the sea after his one-night stand with Margaret the prostitute. Demelza getting an eyeful, though, is pure series invention.

Like Turner, Eleanor Tomlinson is growing on me as Demelza, despite being much taller and gawkier than Angharad Rees. The Cinderella parallels with her grubbing about in the ashes and sweeping the floor while Jud and Prudie (not as funny or as strangely likable as in the books) lord it over her were a touch obvious. But the scene in which she enters the library and Nampara and sees books, maps, curios, and the spinet was a nice little bit of character development that shows her discovering things she never dreamed she could aspire to. (Demelza eventually teaches herself to play the spinet and becomes an accomplished young woman.)

I was less impressed by the way the show is handling the supporting characters, which I am going to rant about at some length, so be warned. Since one major selling point of the new series has been that it adheres more closely to the books, I was taken aback by them having Basset commit suicide over his bankruptcy–which never happens. In fact, Basset–an occasional ally of Ross–has a significant role in later books, plus he remains financially solvent throughout. So, unless they’re going to bring on a younger Basset (the son and heir), this twist makes little sense beyond providing a moment of shock value and showing how bad the Warleggans are.

Apropos of which, George Warleggan is overdoing the Iago shtick of dripping malice and poison in everyone’s ears. While I like the idea of George being present early on–he doesn’t make his onscreen appearance until Episode 6 of the 1975 miniseries–he’s way too obvious in his villainy at this point. You half-expect him to leave a trail of slime wherever he goes. The antipathy between Ross and George has a slower build and burn in the books, plus George doesn’t overplay his hand regarding the Trenwith Poldarks. His open admiration for Elizabeth (contrary to the last episode’s insinuation, George actually wasn’t much of a rake) and his largesse towards Francis have both of them thinking George is their BFF, at least for a while. I also find this George too smooth, foppish, and physically slight–he’s supposed to have a more impressive, muscular physique that recalls his grandfather’s blacksmith origins. This fellow looks as though Turner’s Ross could snap him in half like a twig. So could Ralph Bates, who played George in Poldark 1975.

Finally, there was Verity’s doomed romance, which was at once too truncated and too heavy-handed. In the books, Verity and Blamey’s story plays out over several months as she gets to know him and come to terms with his ugly past before deciding to take a chance on a life with him. (There was no whitewashing of his history by claiming his wife struck him first and that she hit her head by accident: a drunken Blamey kicked her while she was pregnant, and she died of her injuries.) Having Verity meet, fall in love with, and be ready to elope with Blamey in one episode makes her look desperate and rather pathetic, instead of strong and mostly sensible.

For that matter, it wasn’t necessary to make all the men in Verity’s family ogres just to show us the oppression of women in 18th century England. Far from being an unpaid, unappreciated drudge ordered around by her selfish father, Verity is a much-loved daughter of the house, on whom everyone depends, because fair, fragile Elizabeth may not be capable of shouldering all the responsibilities of being mistress of Trenwith. Charles isn’t even opposed to Verity getting married, because he knows she hasn’t had many admirers, and he is sorry to deny her when her suitor’s ugly secret becomes known. And really, who wouldn’t have serious reservations about one’s daughter marrying a domestic abuser and ex-con? And for Verity, love and duty have as much to do with her ultimate decision to break with Blamey as opposition from her father and brother.

Regarding the latter: Francis is coming off even worse than Charles, condemning Blamey even as he himself knocks Verity to the floor when she tries to stop the duel. But then, pretty much everything is “off” about Francis’s characterization in this new series: he’s been given all the flaws and weaknesses, but none of the book version’s redeeming qualities. While Francis isn’t as dashing or as tough as Ross, neither is he a complete drip and weakling. He can be wry, witty, and even funny in a snarky way (snarkier than Ross, actually). He is also capable of regretting his misdeeds and working to atone for them (this is further down the road in the story, but worth mentioning all the same). None of those qualities are in evidence in Poldark 2015, sad to say. Clive Francis, who played the part in Poldark 1975, was far superior to Kyle Soller in conveying different aspects of the character, even in the first few episodes.

As for technical matters, I’m already over the stock footage of Ross galloping his horse in silhouette along the Cliffs of Alienation. Can’t he just be shown departing one place and arriving at his destination? And the recurring Celtic Theme of Romantic Frustration has gone past plaintive and all the way into whiny (and I say this as someone who likes Celtic music). By its third or fourth iteration in the episode, I was ready to strangle the violin player with his (or her) own strings. I don’t object to a soundtrack or incidental music, but for heaven’s sake, mix it up a bit!

10 thoughts on “Venture Once More–Commentary on Poldark, Ep. 2”