Back when I was a kid, we’d make a family excursion to Disneyland in the summer. I remember “E” ticket rides, a park that didn’t include Space Mountain and Big Thunder (which should give you some idea of how long ago that was), and blazing temperatures because you know, Anaheim.

In recent years, after a lengthy absence, we’ve been making the trek to Disneyland in early January, which is not only a more temperate time to visit but also provides the opportunity to see the park decked out for the winter holidays. It’s not just the huge Christmas tree in Main Street (which lights up at night) or the pretty garlands festooning the lampposts and balconies, several of the rides get into the spirit as well.

The Haunted Mansion, for example, always has Jack Skellington commandeer the place, inside and out, and the ride takes on a strong “The Nightmare Before Christmas” influence, with Jack, Sally, and the Oogie-Boogie Man making appearances throughout. Apparently, it’s a bit different every Christmas, which makes things even more interesting. 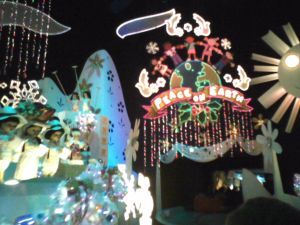 It’s A Small World goes all-out for Christmas too, right down to the Santa Hat on the face of the clock. The dolls now dance against holiday backdrops and the theme song alternates with renditions of “Jingle Bells” and “Deck the Halls” (good news for those who find the theme song annoying).

But It’s A Small World really comes into its own at night, when everything from the exterior building to the topiary animals light up in brilliant reds, greens, and golds. 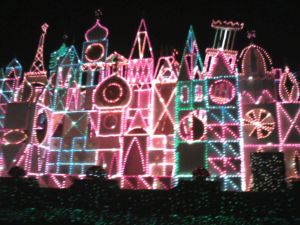 This year I was pleasantly surprised to see another ride hop on the holiday bandwagon: the venerable Jungle Cruise–calling itself “Jingle Cruise” for the occasion–which boasts a “script” with jokes as old as the ride’s setting purports to be. But this time around, the ride added some unexpected Christmas touches, including garlands on the top of the boats and a burlap snowman on the landing. They even dressed the head hunter in a Santa suit! 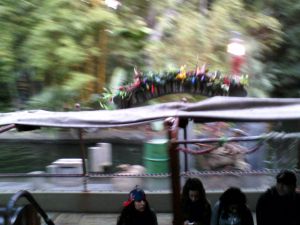 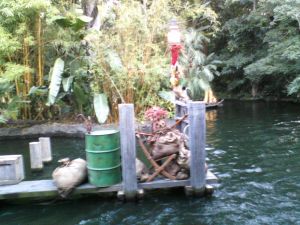 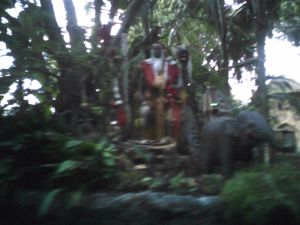 If we return next year around the same time, it will be interesting to see if any other rides decide to get into the act!

Staying until the Fantasyland Castle is lit up has become something of a tradition with us. And it’s always a breathtaking sight when the sky darkens and the towers and turrets lighten from terra cotta to pure white and sprout glittering icicles. The fake snow and soap bubbles drifting down only add to the atmosphere.

This year we ended up staying even later, because the youngest member of our party wanted to see the fireworks, which is something we’ve promised him we’d do “one of these days.” So this time around, we humored him–and I’ll admit, it was worth the hassle and the crowd (packed in six deep–at least–in front of the castle). The display wasn’t long, but it was certainly spectacular, though my cell phone camera can’t quite do justice to it.

All in all, we stayed for about sixteen hours–arriving around the time the park opened and leaving less than an hour before it closed. So we’ve got memories, photographs, souvenirs, tired feet, and–in my case–a new understanding of why my parents were always comatose the morning after a trip to Disneyland!

And of course, we’re looking forward to doing it again next year!