Welcome to what I hope will become a regular feature on this blog–the Spotlight column, focusing on guest authors–whether longtime favorites or brand-new faces–and their works. This week, for the maiden voyage, I’m delighted to host an author whose books I’ve loved since I was a wet-behind-the-ears graduate student, and whom I had the pleasure of meeting at last summer’s RWA conference in Atlanta: Mary Jo Putney. 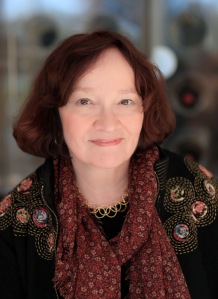 Here, Mary Jo talks about her newest release, Sometimes A Rogue, which came out in late August, and her long career as a romance author.

1. What was the inspiration for Lady Agnes Westerfield’s Academy and how did his experiences there shape your hero, Rob Carmichael?

MJP: I find the idea of deep male friendships sexy, at least partly because it demonstrates that they are loyal and capable of emotional connection.  In my Fallen Angels series, the core characters met at Eton, where they became family for each other, since each of them needed that.

When I was thinking about a premise for a new Regency series, I wanted to do something similar, but different.  The Westerfield Academy takes that male bonding idea and ups the stakes.  When I thought of the school’s tagline, “for boys of good birth and bad behavior,” I knew I had a winner. <G>

Boys end up with Lady Agnes, who is a generous and accepting foster mother to them all, not necessarily because they are delinquents, but because they aren’t fitting the molds their families or society want.  Rob Carmichael is the despised son of an earl’s young second wife.  His relationship with his father is bad and with his older brother, worse.  At the Westerfield Academy, he makes loyal friends, develops a solid sense of himself, and the ability to adapt to whatever life sends him—and it sends him a lot!

2. Several of your novels feature identical twins with complex relationships who end up changing places–Kit/Kira in Dancing on the Wind, and Dominic/Kyle in The Wild Child. How does Sarah and Mariah’s relationship compare to those of your other twin pairs and what do you find especially appealing about “trading places” trope?

MJP: Identical twins fascinate because they look alike and have many traits in common, yet they are distinct individuals.  Unlike Kit and Kira and Dominic and Kyle, Sarah and Mariah were raised apart, and Mariah didn’t even know she had a twin.  Since they meet as adults, in some ways they have a less complicated relationship: they can just be friends and enjoy the bond that immediately manifests.

As for the trading places, it’s always a fun plot device.  Again, Kit/Kira and Dominic/Kyle are different because they exchange places while they’re among people who know them.  When Sarah substitutes herself for her very pregnant sister, she is among people who don’t know her, but her situation is dangerous, unlike the other twin pairs.  Luckily, she’s a lady if not a duchess, so she can carry off the substitution fairly easily.  Other than being in desperate peril, of course!

3. What would you say were your hero and heroine’s strongest/weakest traits, and what makes them the perfect match for each other?

MJP: Both Rob and Sarah are resilient and able to deal with life well, but they’ve become too good at “settling” for what they have.  Deep-seated emotional insecurities that make it difficult for them to give and receive love, so they think love is something they won’t have.  Because they have similar issues, they move rather slowly and warily into love.  But Rob is tough and smart and honorable, and Sarah is sunny-tempered and intrepid, so shared adversity sets them on the road to a deep and lasting love.

4. Your Fallen Angels series–perhaps your best-known work–consists of seven books: the stories of the four “angels” themselves and three of their friends/relatives. Your Lost Lords series has the potential to be even longer. What do you do to keep a series fresh, for you and your readers?

MJP: I don’t focus on the beau monde social scene, so the stories and characters can be quite different.  Also, I don’t draw in earlier characters unless they serve a real story function, so in each new book, you won’t see everyone who has come before; that would boring.  As you say, the Lost Lords series could go on indefinitely, since schools keep getting new classes of students. <G>

5. As this year’s recipient of the Nora Roberts Lifetime Achievement Award, what is the most valuable piece of advice you would offer writers at the beginning of their career?

MJP: Go for quality over speed, and work both hard and smart.  I think that having a long term career writing fiction requires resilience and an ability to roll with the punches even more than it requires talent.  Talent is fairly common, but it’s tenacity that keeps an author standing for years.

Thank you for agreeing to participate in this new feature!

MJP: Thanks for having me, Pamela!

Comment before midnight PST, October 13,  for a chance to win a copy of Sometimes A Rogue. The winner will be notified by email. 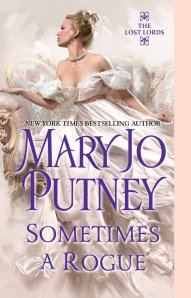 Even the most proper young lady yearns for adventure. But when the very well bred Miss Sarah Clarke-Townsend impulsively takes the place of her pregnant twin, it puts her own life at risk. If the kidnappers after her sister discover they’ve abducted Sarah instead, she will surely pay with her life…

Rob Carmichael survived his disastrous family by turning his back on his heritage and becoming a formidable Bow Street Runner with a talent for rescuing damsels in distress. But Sarah is one damsel who is equal to whatever comes. Whether racing across Ireland with her roguish rescuer or throwing herself into his arms, she challenges Rob at every turn.

Mary Jo Putney was born in Upstate New York with a reading addiction, a condition for which there is no known cure.  After earning degrees in English Literature and Industrial Design at Syracuse University, she did various forms of design work in California and England before inertia took over in Baltimore, Maryland, where she has lived very comfortably ever since.

While becoming a novelist was her ultimate fantasy, it never occurred to her that writing was an achievable goal until she acquired a computer for other purposes.  When the realization hit that a computer was the ultimate writing tool, she charged merrily into her first book with an ignorance that illustrates the adage that fools rush in where angels fear to tread.

Fortune sometimes favors the foolish and her first book sold quickly, thereby changing her life forever, in most ways for the better.  (“But why didn’t anyone tell me that writing would change the way one reads?”)  Like a lemming over a cliff, she gave up her freelance graphic design business to become a full-time writer as soon as possible.

Since 1987, Ms. Putney has published over forty books and counting.  Her stories are noted for psychological depth and unusual subject matter such as alcoholism, death and dying, and domestic abuse.  She has made all of the national bestseller lists including the New York Times, Wall Street Journal, USAToday, and Publishers Weekly.  Five of her books have been named among the year’s top five romances by The Library Journal, while three were listed in the Top Ten Romances of the year by Booklist, published by the American Library Association.

A ten-time finalist for the Romance Writers of America RITA, she has won RITAs for Dancing on the Wind and The Rake and the Reformer and is on the RWA Honor Roll for bestselling authors.  She has also been awarded two Romantic Times Career Achievement Awards, four NJRW Golden Leaf awards, plus the NJRW career achievement award for historical romance.  In 2013 she was awarded the Romance Writers of America Lifetime Achievement Award.

Though most of her books have been historical romances, she has also published three contemporary romances, several paranormal historicals with strong fantasy elements, a young adult historical fantasy trilogy, and numerous novellas and short stories.  She is currently writing the New York Times list bestselling Lost Lords historical romance series for Kensington.

Ms. Putney lives near Baltimore, Maryland with her nearest and dearest, both two and four footed.  She says that not least among the blessings of a full-time writing career is that one almost never has to wear pantyhose.

Visit her on the web at maryjoputney.com

ETA: Sandy wins the giveaway of Sometimes A Rogue! Please contact me with your mailing address so your prize can be sent to you as soon as possible.

Leave a Reply to Melody May Cancel reply