There is some sweetness not to be seen in air,
Not to be trapped in rain, not to be found
In earth, that made this sky of blossoms flare
In blue and sparkling daylight out of the ground;
Some struggle of more than earth is in triumph here
In that gesture of joy and fulfilment lifted on high
Where, dancing with pale blue fire, the branches rear
And the dark twigs hold the sky up to the sky.

Touch the tree with your hand: it is only wood,
A pillar of rain and earth; and what will you find
But rain and earth in its flowers or curious blood?
Yet you cannot hold this tree in a hand of the mind.
Its roots in the earth where some blaze of midnight is lost,
Its boughs in the light wherein more than the stars is concealed,
The jacaranda flames on the air like a ghost,
Like a purer sky some door in the sky has revealed.

While the blue shade falls like a blessing on grass and stone,
I feel the Presence who waited all winter with me
And worked unseen while I watched, with rain and sun
And earth in her hands to make of a simple tree
The loveliest mask that beauty wears on earth.
Is it her banner and symbol the branches bear,
Or the living spirit herself come down to birth,
Glowing in a flesh of blossoms upon the air?

I don’t remember much about the day I accompanied my sister to her high school. I was only eight or nine at the time, and my recollections of who we met or what was said–beyond the observations that we looked a lot alike (observations that are made to this day)–are hazy at best. But I remember my first sight of the trees blooming alongside the walkways leading from one building to another: slim, graceful, grey-barked trunks, delicate green fern-like fronds, and trumpet-shaped lavender flowers with a fragrance like spiced honey.

It was years before I actually knew those were called “jacarandas,” but they’ve remained my favorite tree. Like the lemon, the avocado, and the grey squirrel, jacarandas aren’t indigenous to California but they’ve thrived here, putting on a splendid show every spring and sometimes in the fall, if the weather is mild enough. 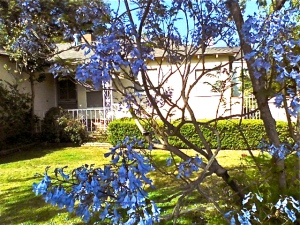 Right now, as June begins, jacarandas are starting to hit the peak of their bloom season. The trees are thick with clusters of flowers, ranging in hue from pale lavender to deep violet, and their scent hangs in the air like a cloud, especially on mild, still mornings. They shed liberally, so that there are almost as many flowers on the ground as they are on the branches, and on my walks, I sometimes need to watch my step so I don’t slip on them or crush the honeybees I occasionally spot crawling out of the downed blossoms. (This seems a rather dangerous way to gather nectar, but I can’t blame the bees for being unable to resist the smell.) And motorists who park under jacaranda trees sometimes complain about the sticky residue the flowers leave on their cars.  But, by and large, most Californians welcome the jacarandas’ blossoming, and enjoy the few short weeks of walking in a purple wonderland.