Last week I mentioned that I was retiring my old Nikon camera because it was no longer reliable, and learning to accustom myself to taking digital photos. In the spirit that practice makes perfect (or at least, much improved), I’ve taken to bringing my cell phone with me on my morning walks and taking photos of the various flora and fauna.

May and June are very pleasant months in SoCal: mild and sunny, but without the scorching heat that sets in around July and lasts through September. And the gardens are blooming with a will.  When I see the jacarandas starting to put forth their first purple flowers, trumpet-shaped and fragrant, I know that spring is truly here.

California star jasmine is another harbinger of spring. Around here it first begins to flower around late March or early April, putting out a few tiny white blossoms that are easy to overlook. 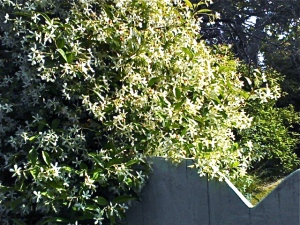 But when May sets in, star jasmine can be seen–and smelled–everywhere: twining around low fences, climbing up arbors, spilling abundantly over walls. The spicy-sweet scent, especially prevalent on cool, slightly cloudy mornings, is irresistible to me.

Of course, spring wouldn’t be spring without roses, and I see some gorgeous ones on my walks, all varying sizes, shapes, and colors. But this bush of blood red roses is so striking I had to stop and capture it. Roses like these must have grown in the Beast’s garden–no wonder Beauty’s father was so tempted!

Spring mornings also bring the fauna out early. Crows hopping territorially over suburban lawns, squirrels running up trees or across telephone lines–just today I saw a crow dive-bombing a squirrel, first on the grass, then up on the roof (the face-off ended in a draw with both participants heading in opposite directions). Alas, this was one occasion on which I didn’t have my cell phone, though crow and squirrel were probably moving too fast for me to have captured them.

But there are always the local cats, who are abroad and stirring much earlier than the local dogs.

Or not stirring, in the case of this handsome fellow who was dozing on a lawn chair when I crept up on him.

Other felines, less somnolent, can be found slinking under bushes or sidling along garden paths, like this shy tortoiseshell.

She deigned to come a little closer for a brief stroke or two, but preferred to remain aloof. (She had a black-and-white companion who was much less standoffish, but he was too busy stropping against my legs, butting against my hand, and generally making a nuisance of himself to pose for pictures!)

I leave you with a picture of my neighbor’s front garden, an oasis of color and bloom. (It’s also a favorite hangout of several neighborhood cats, although none are in residence in the photo.) Makes me almost wish I could garden too, but my thumb remains resolutely brown!