Apollo and The Muses on Mount Helicon (1680) by Claude Lorrain

One question writers are frequently asked is “Where do your ideas come from?” or, alternatively, “What are your sources of inspiration?”

In my case, I can honestly say that my ideas can come from anywhere. From a chance remark that bears unexpected fruit, to a line from a song or poem that leads me to wonder “what’s the rest of the story?”, to a myth, legend, or fairy tale that lends itself to a fresh perspective, to a historical event or anecdote that invites further exploration. All those random details that have me asking “What if?”

Waltz with a Stranger, for example, was inspired by several things: “The Sisters,” an early Tennyson poem about a man who courts identical twins–with tragic results; the transatlantic marriage market so vividly depicted in Edith Wharton’s The Buccaneers; and the fairy tale Beauty and the Beast, but with a gender-twist (the heroine, not the hero, is the one dealing with physical scars and trauma).

My October release, A Song at Twilight, draws partly upon the lives and careers of Jenny Lind and Nellie Melba, two successful professional singers of the Victorian era. The relationship between George Eliot and her editor, George Henry Lewes, was another partial influence. Another work in progress owes a debt to the life of Lillie Langtry and the films Roman Holiday and Notting Hill.

Photo of Jenny Lind, The Swedish Nightingale, in the 1840s

History has always proved a fertile breeding ground for ideas. It hasn’t escaped my notice, as an avid reader, that George R. R. Martin’s A Song of Fire and Ice was inspired by The Wars of the Roses and, to a lesser degree, the Hundred Years’ War. 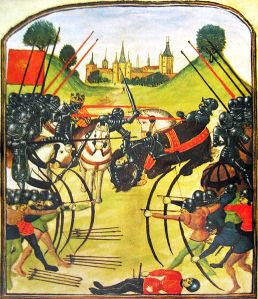 Illustration of The Battle of Tewkesbury, a pivotal event of the Wars of the Roses. From the 15th century Ghent Manuscript

Likewise, Susan Howatch, whose work I’ve recently discovered, reimagined the histories of the Plantagenets in several “modern” novels: Penmarric (Henry II and Eleanor of Aquitaine), Cashelmara (Edward I, Edward II, Edward III), and The Wheel of Fortune (Edward the Black Prince, Richard II, Henry iV, Henry V). Barbara Taylor Bradford, best known for her family saga that began with A Woman of Substance, did something similar in The Ravenscar Dynasty (Edward IV) and its sequels (Yorks, Lancasters, Tudors).  For me, the fascination of that kind of book lies in how closely the author chooses to parallel the lives of her characters with their fictional counterparts–and whether she changes the final outcome. Or if, as was the case in so many of these histories, things are destined to end in tears . . . and blood.

So, writers, where do you find your inspirations? And readers, can you spot the inspirations–whether historical, mythic, artistic–in some of your favorite books?